Paasche Airbrush and 1313FX Fright Zone present the 1st Annual MONSTER MAKEOVER CHALLENGE to be held at 12:00 pm on Saturday, March 22. The call for challengers went out last summer and here are the haunted attraction industry’s makeup artists that will go head-to-head in this LIVE competition, with exciting prizes up for grabs! 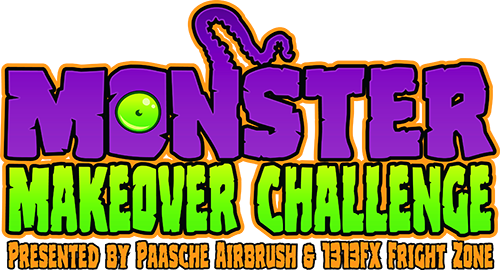 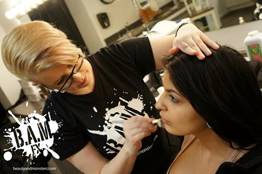 I’ve been an artist my entire lifeyetfound mypassion in beauty and monsters. I love the art of transformation. I’ve been a beauty artist for 10 years and beganFX makeupsix years ago. Five of those years include applying makeup for The Dent Schoolhouse Haunted Attraction. Iapply makeup forB.A.M. FX (beautyandmonsters.com) and teach two beginner Makeup FX classes for the Art Academyof Cincinnati..I have worked on feature films (Revelation Trail), music videos (Zombie- Family Force Five), and several short films. I continuously challenge myself to become a better, well rounded artist. I plan on attending the 2014 Transworld Halloween and Attractions Show and will be representing The Dent Schoolhouse Haunted Attraction. I have a “No Guts, No Glory” attitude so I’d love to participate in this makeup challenge! 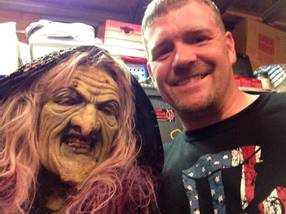 I’ve been in the haunted house/FX industry ever since I was a little kid. I’ve always been fascinated by the work of a little know FX artist from Green Bay named Dale Kuipers, who is most famously credited for the movie Caveman which oddly enough is a comedy. When Gremlins came out he made a Gizmo suit for a theater premier and even as a little kid I begged my mom to go meet Dale since he would be there. I am a self taught artist who has the ability to “think outside the box”. My earliest memory of SPFX waswhen I put a witch prosthetic on my mom that we bought at Toys R Us I believe they were called living faces. My mother won a costume contest that night and thatis when it started for me. I later in life made my mother bring me to the closing of the last outdoor theater in Green Bay where they were playing a horror double feature and Dale made about 20 zombies. They climbed over the wall to scare everybody. Not me though, all I could think about was seeing Dale again and picking his brain. Dale died not long after and I vowed to keep doing make upsand FX designs until I believed Dale would be proud. 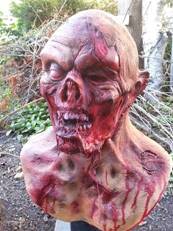 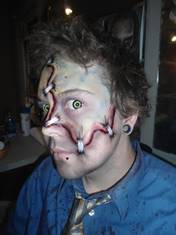 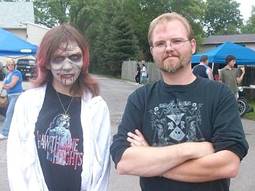 I’ve been into Halloween and making monsters since I was a little kid. When I was in my early 20s, I entered a contest through Fangoria Magazine to win a scholarship to the Joe Blasco makeup school in Orlando Fla. I won a partial scholarship and graduated in 1995. The school used some of my work for there ads in issues#165, 166 and 167. Awesome! Over the years I’ve worked on many low budget projects and haunted attractions. Building my sculpting and painting skills. Right now I’m lead makeup artist for Abandoned Haunted House Complex in Mount Pleasant,Wisconsin. I work with a team of three artists and we have an average of 80 actors a night that we do make-up on. So I’m no stranger to working under pressure. In the off season, I run my own company. HOEPNER FX. I do body painting and face painting for parties and corporate events. 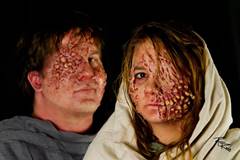 I’ve been addicted to monsters since my childhood because of my father. Halloween was our Christmas and scary movies were always on the TV. As I got older I realized that making monsters was an actual job and so became my love affair. I went to an fx school after High School and went on to film movies upon graduation. Monsters have been my life professionally for 7 years. I’ve worked as a makeup designer for several haunted houses in the Southern Illinois and St. Louis area. Now I paint and design for VFX Creative Studios, who supply Haunted Houses and Theme Parks globally, and continue to do fx for film.